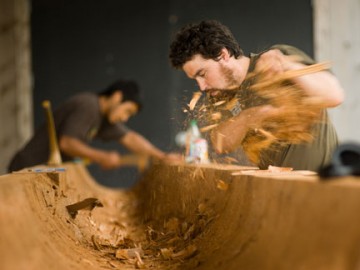 The Haida Heritage Centre is located at Kaay Llnagaay, Haida Gwaii, on the Northwest coast of BC.  Jaleen Edenshaw, in the picture above, is carving the Gwaii Haanas Legacy Pole.  It is a 42-foot monumental pole being carved to honour the 20th anniversary of the Gwaii Haanas Agreement, between the Haida Nation and the Government of Canada.

You can learn more about us at: www.haidaheritagecentre.com/