Evan Tlesla II Adams is a Coast Salish actor and physician from the Sliammon Band near Powell River, BC, Canada. 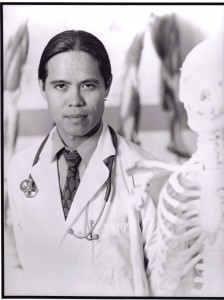 Evan is a full-scholarship alumnus of St. Michaels University School and of Lester B. Pearson College of the Pacific of Victoria, BC. He stars in the Emmy-winning TV-movie “Lost in the Barrens” and its nominated sequel “Curse of the Viking Grave”. Besides numerous episodics like “The Beachcombers” and “Black Stallion”, he also appears in the feature film “Toby McTeague” and the Fox-TV movie “Lakota Moon”. On the stage, some of his highlights include the role of Edmund in Women in View’s “Lear”, Creature Nataways in the Arts Club Theatre’s production of Dry Lips Oughta Move to Kapuskasing, and Jamie in Headlines Theatre’s “Mamu.”

Evan stars as Thomas Builds-The-Fire in ShadowCatcher Entertainment’s SMOKE SIGNALS, written by Sherman Alexie and directed by Chris Eyre. SMOKE SIGNALS won the coveted Audience Award for best film and the Filmmakers Trophy at the Sundance Film Festival in 1998. He also won Best Actor awards from the American Indian Film Festival, and from First Americans in the Arts, and a 1999 Independent Spirit Award for ‘Best Debut Performance’. Evan is the past host of Aboriginal Peoples Television Network’s #1-rated show Buffalo Tracks, was a regular on the CBC’s night-time TV series These Arms of Mine, and won an LA OutFest Grand Jury Award for Outstanding Actor for FallsApart Production’s feature The Business of Fancydancing. He has been a regular on the CBC TV-series DA VINCI’S CITY HALL and APTN’s RAVEN TALES. He recently won a Gemini Award for co-hosting the National Aboriginal Achievement Awards 2011, along with Adam Beach.

Aside from his career in the arts, Evan has completed 3 years of pre-med studies at the University of British Columbia (UBC), a Medical Doctorate from the University of Calgary in 2002, and a Family Practice residency (as Chief Resident) in the Aboriginal Family Practice program at St. Paul’s Hospital in Vancouver, BC. He is the 2005 winner of the (provincial) Family Medicine Resident Leadership Award from the College of Family Physicians of Canada (CFPC), and the 2005 national winner of the Murray Stalker Award from the CFPC Research and Education Foundation. Dr. Adams has a Masters of Public Health from Johns Hopkins University in Baltimore, MD. He is the past-President of the Indigenous Physicians Association of Canada and is the past Director of the Division of Aboriginal Peoples’ Health, UBC Faculty of Medicine. He was the first-ever Aboriginal Health Physician Advisor in the Office of the Provincial Health Officer, BC Ministry of Health and with the (BC) First Nations Health Council. He is currently the Deputy Provincial Health Officer for the province of BC.