The Haida village of Skidegate is located at Skidegate Inlet at the south end of Graham Island, Haida Gwaii.

Skidegate is known as SGIIDAGIDS in Haida language, which means child of red chiton. The original name of the village was HLGaagilda.

We have a traditional Haida dance group, Hltaaxuulang Gud ad K’aajuis, who is made up of different clans sharing their Haida songs and dances together.  The Haida name means “Friends Singing Together.” You can see a picture below which can also be seen here. 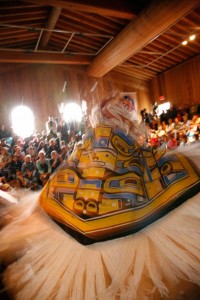 You can learn more about us at: www.skidegate.ca