The advent of the fur trade in west central North America during the 18th century  was accompanied by a growing number of mixed offspring  of Indian women and European fur traders.  As this  population established  distinct  communities separate from those of  Indians and Europeans and married among themselves,  a new Aboriginal people emerged  – the Métis people – with their own unique culture, traditions, language (Michif), way of life, collective consciousness and nationhood (Metis Nation Canada).

There are many traditions in the Métis culture, some of which are fiddle playing, folk songs and tales, crafts such as beading and the Métis Sash. The sash served as a temporary tumpline, key holder, first aid kit, washcloth, towel and at times an emergency bridle or saddle blanket. It became a sewing kit at times during a buffalo hunt. This sash was particularly familiar to those who settled in the Red River area and is still an integral part of Métis celebrations today.  The sash has several colours and below are the meaning of their colours. 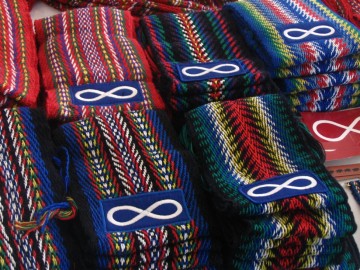 » Red – Is for the blood of the Métis that was shed through the years while fighting for our rights.
» Blue – Is for the depth of our spirits.
» Green – Is for the fertility of a great nation.
» White – Is for our connection to the earth and our creator.
» Yellow – Is for the prospect of prosperity.
» Black – Is for the dark period of the suppression and dispossession of Métis land.

You can learn more about us at: www.mnbc.ca.